Author: Marketing / Source: Company materials
More and more consumers put emphasis on the composition of products and make a conscious choice regarding products they buy.
Along with the increase in food awareness, the consumers started to favour more natural products. They buy more and more 100% juices (recreated from concentrate) and NFC-type juices (Non From Concentrate, which are commonly known as direct juices). [1]
The chart shows an increase in the consumption of NFC juices in Europe. According to this data, the consumption of NFC juices increased by almost 14% in the last 5 years.
According to the European Fruit Juice Association data collected in the "Liquid Fruit Market Report 2017", the consumption of juices in Europe in 2012-2016 is as follows:
In the years 2012-2016, the consumption of NFC juices in Poland increased by 153%, from the level of 56 million L to 142 million L. [1]
Division of Fruit and Vegetable Technology, Faculty of Food Sciences, Warsaw University of Life Sciences conducted survey research aimed at examining the behaviour and preferences of consumers on the market of non-alcoholic beverages. Out of 105 respondents, the vast majority declared that their regularly consumed beverage is mineral water (89.5%), fruit juices (66.7%) and carbonated drinks (37.1%), which is compliant with the currently observed trends and it confirms the increase in food awareness. [2]

"The forward looking development directions of the segment of NFC juices include: mixed fruit juices – from black currant, cherries, raspberries or strawberries; juices with functional additives, such as sea buckthorn, cranberries, ginger or green tea; as well as vegetable NFC juices and beverages based on NFC juices. – The forward looking direction will be the production of ecological NFC juice - said Piotr Trojanowicz, the president of ZPOW Polkon Sp. z o.o., during the XXI International Symposium of Polish Association of Juice Producers, which took place on 23-25 ​​May in Łódź."[3]
Increased market demand for NFC juice forces the fruit processing plants to reorganize the production process. For industrial pressing plants, this creates a problem of effective use of owned machines and devices, which were so far used for the production of concentrate. As a result, in order to remain competitive and offer products of the highest quality, the processing plants are forced to modernize their production line or to invest in a second technological line adapted exclusively to the production of NFC-type juices.

B&P Engineering specializes in the construction of complete technological lines for the production of juices (including NFC) and concentrates.
As one of the few companies in the world, we provide comprehensive service for the investment of construction of the technological lines for the production of NFC juices and concentrates.
We implement greenfield investments and we carry out turnkey projects.
Cooperation with us means that the client will get:
Devices for the production process of NFC juices manufactured at B&P Engineering:
As part of the section of raw material acceptance, we offer the following:

Another important device for the producers of NFC juices is a pasteuriser.

Pasteurisation systems offered by B&P Engineering are characterized by:

Depending on the client’s needs, we manufacture pasteurisation systems as aseptic and hygienic.
We use centrifuges from reputable manufacturers with operation parameters adapted to the given application.
Investment in the storage space is a significant cost factor during the construction of a technological line for the manufacture of NFC-type juices.
Warehouses constructed by B&P Engineering are characterized by efficiently developed space and modern control techniques, including the option of full automation of the warehouse processes.
Significant features of aseptic warehouses for the storage of NFC juices include:
If along with the tanks, the client will decide to purchase visual control systems for the process of washing and sterilization of tanks before filling, then it will be possible to have an insight into the parameters of sterilisation, pressure, temperature and time.
The control system of NFC warehouse implemented by B&P Engineering provides:
​
The thing that distinguishes the sterile air unit (tank sterilizer) manufactured by B&P Engineering is the possibility to handle two tanks at the same time. When one tank is sterilized with the steam, the other can be purged and cooled down with sterile cold air. This shortens time of the process and due to that fact, we save the steam.
We’re looking forward to doing business with you!
Footnotes:
[1] Source: AGROindustry 1/2018, „Pogoda boleśnie weryfikuje nasze plany” (The weather verifies our plans painfully)
[2] Source: Przemysł spożywczy nr 06 2018, „Preferencje konsumentów na rynku napojów bezalkoholowych” (Food industry no. 06 2018, „Consumer preferences in the market of non-alcoholic drinks)
[3] Source: Portalspożywczy.pl, „5 najważniejszych trendów w segmencie soków NFC” (Foodportal.pl, 5 most important trends in the NFC juice industry) 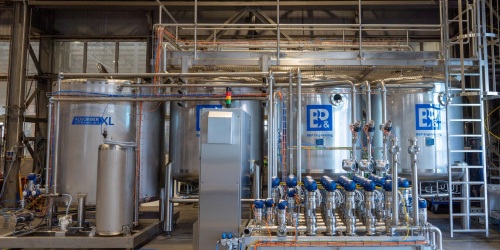 ADS XL Adsorber is a technologically advanced, modern device designed for concentrate manufacturers, the use of which increases the competitiveness (...) 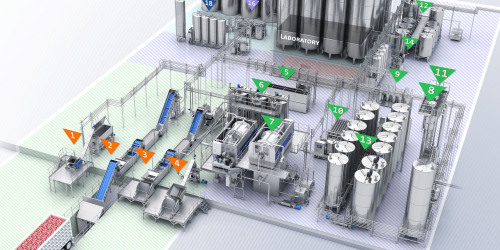 The process of production of juices and concentrates in a nutshell!

How fruit juice and concentrate is produced? 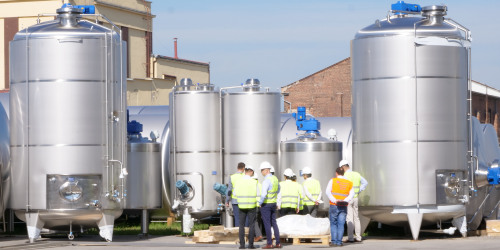 The tanks manufactured by B&P Engineering are synonymous with the highest quality, modernity and advanced technology.